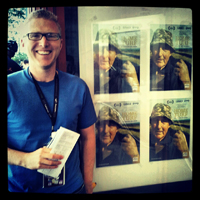 Ross Whitaker's first feature film, the self-funded SAVIOURS, was selected for theatrical release in Ireland and acclaimed as "best Irish film of 2008" (Sunday Tribune) and more recently as one of the "100 Best Irish Films of All Time" (Sunday Times).

HOME TURF (2011) had its International Premiere at Hot Docs in 2012 and has screened at Krakow, Silverdocs and won the 'Man and Nature' award at Film Festival Della Lessinia.

Get in touch if you would like to enquire about my past work, current projects or how I can help you.